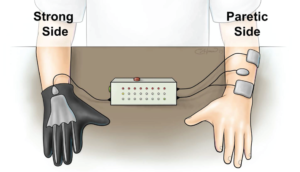 According to new research published in the American Heart Association journal Stroke, researchers at the MetroHealth System, Case Western Reserve University, and the Cleveland Functional Electrical Stimulation Center have developed a glove that allows patients be in control of the stimulation to their weak hand.

Stroke Technology For the Hand

The electrical currents are delivered using a glove with sensors. By wearing the glove on their unaffected hand and opening their fingers, the affected side receives a similar amount of stimulation to open the weakened hand. This wearable technology put the patient back in control of their hand while enabling them to participate in electrical stimulation therapy.

“Based on positive findings from our previous studies, we sought to determine if the new glove-controlled hand stimulation therapy could be more effective than the common therapy in improving hand dexterity in patients who are more than six months past their stroke,” says Jayme S. Knutson, Ph.D., senior author of the study and an assistant professor of Physical Medicine and Rehabilitation at Case Western Reserve University School of Medicine in Cleveland, Ohio.

Knutson and colleagues enrolled a total of 80 people who were survivors of stroke. The participants were divided into two groups. The first group received therapy using the new glove, and the second group received the standard treatment.

Both groups used the electrical stimulator on their own at home for 10 hours per week and practiced hand tasks with an occupational therapist in the lab for a further 3 hours a week. The course of treatment lasted 12 weeks.

Measurements of hand function were taken before and after therapy using a standard dexterity test that calculated the number of blocks participants could pick up from a table with their stroke-affected hand, lift over a barrier, and release to another area of the table within 60 seconds.

The researchers found that participants from the group that used the electrical stimulation glove presented greater improvement on the dexterity test by 4.6 blocks on average, compared with the common therapy group, which improved by 1.8 blocks.

Patients who displayed the most significant improvement on the dexterity test using the glove were less than 2 years post-stroke and had some finger movement at the start of the study. They improved by 9.6 blocks on the dexterity test, compared with 4.1 blocks in the common therapy group.

The current research was conducted at a single site. The team aims to replicate the study at multiple sites in the future to confirm the results and also measure improvements in the quality of life for patients.

One key outcome of the investigation demonstrates that stroke patients can use the new technology to have the freedom and independence to administer their therapy at home rather than in a healthcare setting.