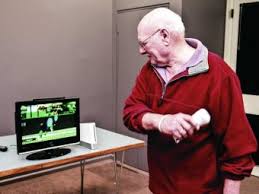 This study compared the use of the Wii Nintendo to a conventional physical therapy program to improve both sensorimotor activity (measured by the total Fugl-Meyer assessment score) and quality of life (measured using the SF-36).  Thirty stroke survivors were randomly assigned to either group and all participants received two hourly sessions for each of two months.

END_OF_DOCUMENT_TOKEN_TO_BE_REPLACED

Mobility and Leg Recovery Following Stroke and Other Neurological Injuries

One of the most common impairments resulting from stroke is paralysis, which can affect a portion or the entire side of the body. Problems with body posture, walking, and balance can be significant. Two thirds of the patients are unable to walk without assistance in the first week after stroke (Jorgensen HS et al. Arch Phys Med Rehabil, 1995). Approximately 35% of survivors with initial paralysis of the leg do not regain useful walking function (Hendricks HT et al. Arch Phys Med Rehabil, 2002). Although 65% to 85% of stroke survivors learn to walk independently by 6 months post stroke, gait abnormalities and poor endurance persists through the chronic stages of the condition (Wade DT et al. Scand J Rehabil Med, 1987).

END_OF_DOCUMENT_TOKEN_TO_BE_REPLACED

There is strong evidence that repetitive task specific training techniques improve upper extremity function. Task training yields long lasting cortical reorginization specific to the corresponding areas being used. Traditional treatment interventions are based primarily on routine exercises and/or purposeful activities. For many patients, the road to recovery is long and difficult and clinicians are challenged with the daunting task of maintaining patient motivation and compliance while alleviating boredom. Computer based games and virtual reality have recently emerged as novel strategies to maintain motivation and compliance while providing the necessary repetitive training.

END_OF_DOCUMENT_TOKEN_TO_BE_REPLACED

Approximately 30% of all stroke patients suffer from post-stroke visual impairment (Sand KM. Acta Neurol Scand Suppl. 2013). Following a stroke or other neurological injuries, various types of vision deficits can occur including the inability to recognize objects, color vision deficits and difficulty with perceiving various types of motion. Approximately 20% experience permanent visual deficits (Romano JG. J of Neurol Sci. 2008). According to the National Stroke Association,  homonymous hemianopia, which is the loss of one half of the visual field in each eye, is the most common visual disorder.

END_OF_DOCUMENT_TOKEN_TO_BE_REPLACED

Arm and Hand Recovery Following Stroke and Other Neurological Injuries

The latest research shows that the brain is capable of rewiring and adapting after stroke. Therefore, arm and hand recovery is more possible than previously thought. However, in order to improve function in the upper limb, the client must be willing to incorporate the affected side purposefully, functionally, and repeatedly. In addition to functional training, other beneficial strategies include strength training, mental imagery, robotics, and gravity compensation.

Below are the key takeaway’s that highlight the current thinking from the scientific community.