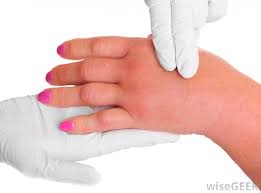 Edema is swelling caused by excess fluid trapped in the body’s tissues. Although edema can affect any part of your body, it’s most commonly noticed in the hands, arms, feet, ankles and legs. Edema occurs from a variety of reasons. For individuals who are inactive, a collection of fluid in the ankles and legs, fingers and hands can be seen. Individuals that are paralyzed after a neurological injury such as stroke, may have fluid collection just on the affected side.

Hand edema following stroke with hemiparesis is associated with pain and stiffness, which can lead to a decrease in active motion and disuse. Hand edema may be an isolated problem or occur as a symptom of shoulder-hand syndrome. The etiology of the development of hand edema is unclear. The most widely accepted explanation is that of increased venous congestion related to prolonged dependency and loss of muscle pumping function in the paretic limb (Leibovitz et al. 2007).

In contrast, Gebruers et al. (2011) reported finding no relationship between activity limitations and the presence of edema in a cohort of 130 acute stroke patients followed over a period of 3 months. There were no statistically significant differences on a variety of clinical indications, including stroke severity and Fugl-Meyer Scale scores between the group of patients who developed edema and those who did not. The authors concluded that the theory suggesting that disuse in the paretic limb is the major cause of the development of hand edema is unlikely to be true. The incidence of edema was also lower in this study.

Swelling and edema of the hand are common among stroke patients in clinical rehabilitation. Treatment approaches to aid in the reduction of hand edema following stroke include passive range of motion exercises, neuromuscular stimulation, intermittent pneumatic compression, hot/cold therapy and compression garments.