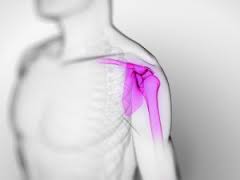 Stroke is a major cause of disability in the world. Significant impairment in the affected arm can be seen roughly between 30 and 70% of individuals suffering from stroke (Kwakkel et al., Lancet, 1999). One of the most common areas often affected by a neurological injury is the glenohumeral joint (i.e., shoulder). The shoulder complex is a very sophisticated and complicated joint in the body. It consists of 20 muscles, 3 bones, 3 joints, and 1 articulation. It has the greatest ROM of any joint in the body but at the expense of stability.

Because the shoulder is very mobile, it is highly vulnerable to secondary complications following a stroke or other neurological injuries. Shoulder subluxation is often seen in clients suffering from weakness in the arm due to hemiparesis. Typically, over time, this continued weakness causes the humeral head (ball of the humerus) to shift out of the socket (glenoid cavity) in an inferior direction. This is partly due to gravity pulling the weight of the humerus downward, and more importantly, also due to the lack of shoulder muscle strength resulting in the inferior displacement. The subluxation is palpable by feeling the space or gap between the top of the shoulder bone (acromion) and the top of the humerus (ball).

The main goal for treating shoulder subluxation is to minimize or reduce the instability. Dynamically, this is possible by strengthening the muscles surrounding the joint. Treatment typically focuses on techniques that strengthen the deltoids (large shoulder muscle group) since they are the strongest proximal migrators. The primary role of the deltoid muscle group besides arm elevation is to maintain the humerus securely (i.e., up) in the glenoid. If the client has the ability to voluntary activate the affected shoulder muscles (i.e., arm elevation), the clinician will prescribe appropriate active arm exercises to adequately challenge him or her in therapy and at home. If the client has little to no active movement in the arm, he or she will be unable to perform proper active range of motion exercises sufficient enough to adequately fire the deltoids. Therefore, it is common for clinicians to incorporate Electrical Stimulation, as a helpful alternative, with the goal of slowing down muscle atrophy and improving strength.

Did you know? Due to changes in glenoid fossa position as a result of scapular downward rotation, traditional theorist for many years believed that the labrum can no longer provide sufficient support (locking mechanism) to secure the head into the glenoid fossa. New research has emerged that suggests that very little evidence exists between scapular rotation and subluxation (Prevost et. al, Culham et al., Price et. al).

Besides strengthening the shoulder and scapula muscles with or without electrical stimulation, other forms of treatment may include maintaining joint alignment through the use of subluxation slings and taping/strapping as well as positioning techniques while lying in bed, sitting and standing.

Treatment programs that focus on shoulder recovery early and often will position clients with the best possible chance for success. Strong emphasis must be placed on strengthening the deltoids as soon as possible so the humerus can maintain adequate stability in the joint. Increased stability will result in less pain and improved function.